We record for the first time Acanthagrion jessei, Nehalennia minuta, and Perilestes solutus in Colombia, based on males and females taken at the campus Barcelona at the Universidad de Los Llanos, located in the foothills of the Colombian Eastern Andes in the Orinoco river basin.

Colombia is a megadiverse country, as its forests and freshwater ecosystems create ideal conditions for the establishment of various species of fauna and flora (Rangel, 2015). Within the fauna, insects correspond to 65.3% of the diversity of invertebrates recorded in the country (Escobar et al., 2020). The odonates in Colombia currently include more than 471 documented species (Álvarez-Álvarez et al. 2021, Stand-Pérez et al. 2021), and although they do not represent the highest diversity among insects, it is one of the most studied groups of insects (Bota-Sierra et al., 2016).

The genus Nehalennia groups six species with a wide distribution, one in Eurasia and the other five in the New World, from Canada to Brazil (Garrison et al., 2010), but there are no records from Colombia in the literature. The genus Perilestes has a South American distribution, occurring in the tropical rainforests of Colombia, Venezuela, Guyana, Surinam, Ecuador, Peru, Bolivia, and Brazil (Garrison et al., 2010). Eight species are recognized in the genus, one of them in Colombia, Perilestes kahli (Pérez-Gutiérrez & Palacino-Rodríguez, 2011).

Several sampling efforts have been carried out in the Colombian Orinoco basin (e. g., Bota-Sierra, 2014; Palacino-Rodríguez et al., 2017), and new records keep being reported from this rich area (Álvarez-Álvarez et al., 2021), showing that an intensive exploration of this region is needed to assess the real number of Odonata species inhabiting this place. Here we present three new records for the region and the country in the genera Acanthagrion, Nehalennia, and Perilestes.

Study site and habitat. Sampling was done in January and December 2020 at the Colombian Eastern Andes foothills in the Meta department (4°04'20.8"N, 73°34'55.1"W, 380 m a.s.l.; Figure 1), on the Barcelona Campus (Universidad de los Llanos), where the natural vegetation corresponded to savanna ecosystem (Jaramillo-Justinico & Rangel-Ch., 2014). The climatic regime is unimodal, with a rainy season from April to November and a dry season from December to March (Minorta-Cely & Rangel-Ch., 2014). The maximum temperature reported is 32°C and the minimum is 20°C (IDEAM, 2019). 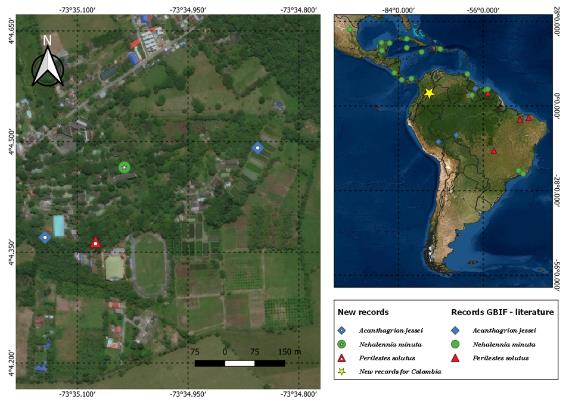 The specimens of P. solutus were captured within a secondary forest composed of plants of the genera Poeppigia, Didymopanax, Zebrina, and Monstera, which are distributed around a drainage channel that crosses through the university campus. A. jessei was captured flying within secondary forest and around artificial ponds used for fish farming by the Instituto de Acuicultura de la Universidad de los Llanos (IALL). N. minuta was captured flying in an urban area, characterized by infrastructure such as classrooms, administrative buildings and laboratories, surrounded by vegetation predominated by Poeppigia, Erythrina, Bauhinia, Swietenia, Ceiba, and Ficus.

We collected seven adults of Acanthagrion jessei Leonard, 1977 (Figure 2a), two adults Nehalennia minuta (Selys in Sagra, 1857) (Figure 2b), and two adults of Perilestes solutus Williamson & Williamson, 1924 (Figure 3). All of them recorded for the first time for Colombia (Figure 1). 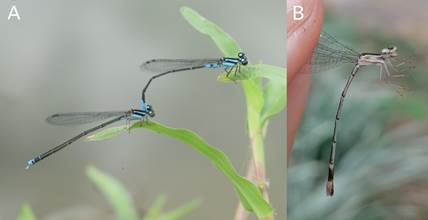 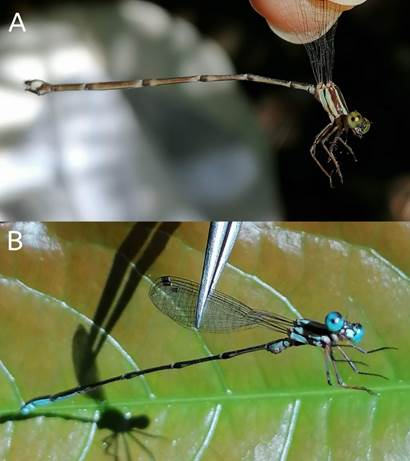 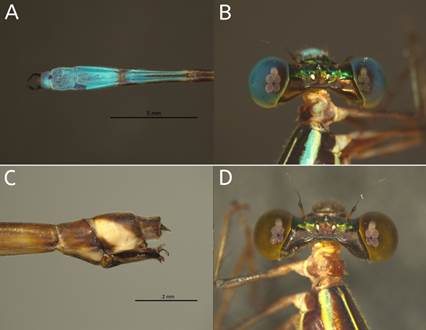 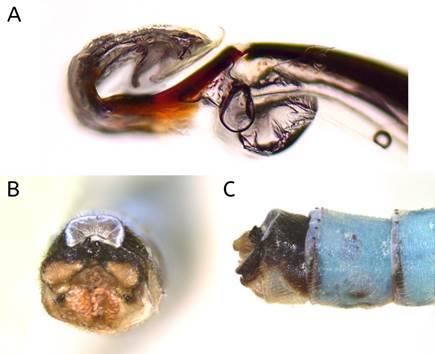 Habitat use recorded here for the three species coincides with those described for each of the genera. N. minuta was captured in the urban area of the university campus, 100 m from the drainage channel that crosses it and the ponds used for fish farming. Adults of the genus Nehalennia are known to inhabit grasslands around ponds or streams with slow moving water (Garrison et al. 2010). The adults of genus Perilestes are forest stream dwellers (Williamson & Williamson, 1924); P. solutus was found in the secondary forest, which together with the drainage channel, create the ideal conditions for the establishment of this specie. Finally, slow backwaters of streams and ponds are the most frequent habitats of the genus Acanthagrion (Garrison et al., 2010); A. jessei was found in both habitats generated by anthropic intervention within the university campus.

The three species have wide distributions, and all of them were previously recorded in countries neighboring with Colombia. A. jessei was previously recorded at Guyana, Peru and Brazil (Leonard, 1977; IUCN, 2020); P. solutus includes Brazil and Suriname (Bastos et al., 2019; Belle, 2002; Calvão et al., 2014; Garcia-Júnior & Picanco-Souto, 2021; Machado, 2015); and N. minuta has a broader distribution including Cuba, Suriname, Costa Rica, Mexico, Dominican Republic, Guyana, United States of America, Guatemala, Jamaica, Trinidad and Tobago (De Marmels, 1984; Belle, 2002; Ramírez et al., 2000; Paulson & Dunkle, 2021; GBIF, 2021). The new reports of these species for Colombia highlight the importance of studying the odonatofauna, as much remains to be discovered.

We thank the Museo de Historia Natural Unillanos (MHNU), for the loan of the facilities and equipment necessary for identification; the Biology Laboratory of the Universidad de Los Llanos, for the loan of the S9i Leica stereoscopic microscope equipment for taking photographs; Miguel Ángel Cortés and Jorge Enrique García Melo, for their help in photo editing, and the reviewers for their comments that improved the manuscript. This is publication number 13 of the MHNU.